You are here: Home › Indonesia

The Ramayana Monkey Chant, also known as the Kecak (ketjak), originated as a “trance”/exorcism chant in Bali that only became internationally known after German artist Walter Spies, living in Bali, Indonesia, in the ’30s, helped develop it into a performance depicting a battle described the Ramayana, an ancient Sanskrit epic.
Today the Monkey Chant is a tourist-friendly Balinese spectacle during which over a hundred male performers wearing checked waist cloths, chanting “chak chak chak chak chak!,” gesturing boldly with their arms to act out the tale in which the monkey-like Vanara aids Prince Rama in his fight against evil King Ravana. Whatever the origins of the Ramayana Monkey Chant, it sure is spectacular.

Let’s meet Rhoma Irama, “the King of Dangdut.”
Dangdut music emerged in the mid 1970s from the poorer areas of Jakarta as a politically astute style that blended Islamic, Indian and Malaysian traditional musics with American rock. After developing a decent career performing light-hearted songs, in the mid ’70s Rhoma Irama began expressing his Islamic faith and conservative morals through his lyrics, even as his music veered more toward American rock. National Geographic describes Irama’s stage persona at the time: “the King of Dangdut, dressed in a tight black tanktop, headband, leather pants, gloves and boots, and playing a black flying-V guitar, sweatily glistening in heavy-metal dangdut glory–certainly a far cry from the bubblegum, coy flirtatiousness of the heavily made-up teen dangdut singers of the genre’s early years.” The government of Indonesia feared a politicized, primarily poverty-stricken dangdut audience would become a threat, so they banned Irama from appearing on state television.  Irama has continued to be famous, musical and moralistic, using his music to sway elections, even while being mired in controversy.

Kroncong is a style of music that started in Indonesia when Portuguese settlers in the 17th and 18th centuries shared their Western instruments with local musicians.

The genre only really took off in the 1930s when the film industry in Indonesia transformed it from working-class urban music to music from the cinema. In the 1940s independence movement activists adopted Kroncong as a national form, Gesang Martohartono’s “Bengawan Solo,” written during the Japanese occupation during World War II, which we hear performed in this video, is the genre’s most famous song. 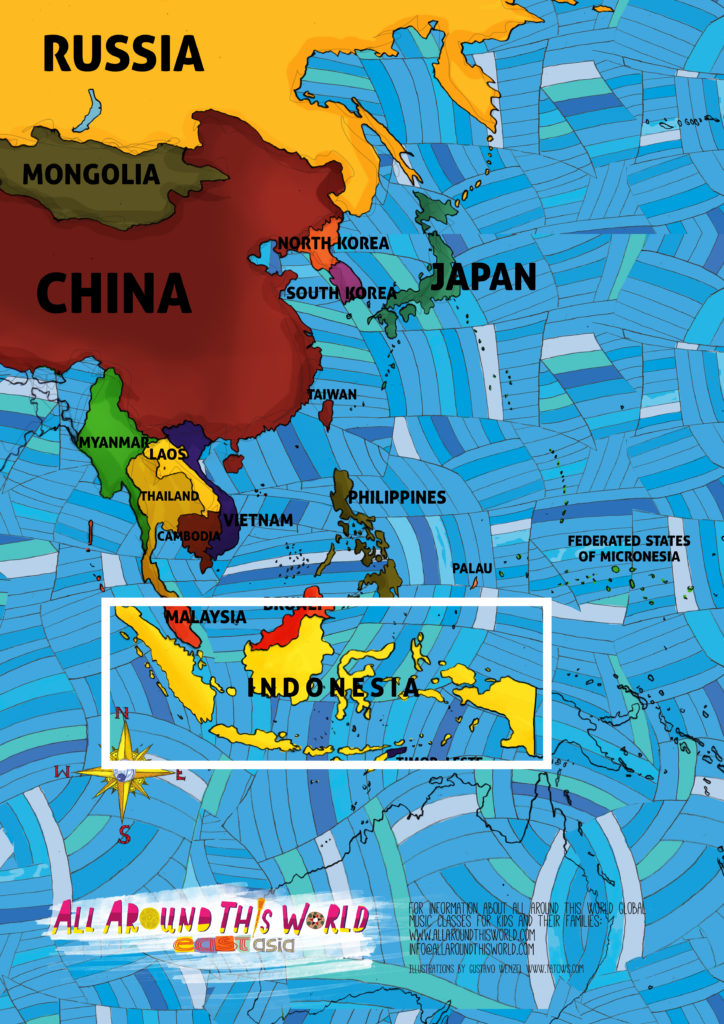 Our online class last week gave us the chance to visit Indonesia, an extraordinary nation that exists in 17,508 bits. There are that many islands in the 3,000 mile-long Indonesian archipelago and on those islands live nearly 240 million people who are members of over 300 ethnic groups. Indonesia is the most populous nation in Southeast Asia, the world’s fourth most populous nation, and, with approximately 85% of Indonesians practicing Islam, the world’s most populous majority-Muslim nation (though its government remains consciously secular). Despite the many logistical nightmares inherent in keeping such a multifaceted nation afloat, Indonesia claims — at least, publicly — to b proud of its diversity. What’s Indonesia’s national motto?: Bhinneka Tunggal Ika! That means “Unity in Diversity,” or “many, yet one.”

At Adau is a groundbreaking world music ensemble from Malaysia — specifically, from the Malaysian part of the island of Borneo. The band fuses many forms of traditional Bornean music — all your favorites, like Sape’, Perutongs, Beduk and Kidibad and even Takebung — with rock instruments like the drum kit and electric guitar. At Adau wants much more than to just play pleasant songs from Borneo: says their website, “At Adau musical creations do not only represent their feelings and expressions but also reflect peace, serenity, appreciation for nature and a deep love and harmony between people around the world, regardless of cultural backgrounds, races, and boundaries.” Cool! Watch them rock Sarawak’s Rainforest World Music Festival in 2017

Do you prefer Balinese Gamelan or Javanese. What? You can’t decide? Or…you love both!

Gamelan is an extraordinary form of music, an engaging Indonesian art form that features a community orchestra performing on an ensemble of instruments — primarily an impressive array of gongs — that are tuned very specifically to one another. (“Gamelan” is actually the name for the set of instruments rather than the genre.) Gamelan compositions are melodically complex because of the interaction of the various gongs and other percussion instruments that seem to sing to one another, dance around each other and playfully chase each other about. Rhythms interlock as well, with two musicians playing intimately connected parts to form a unified whole. There are two main centers of gamelan in Indonesia — Bali and Java.  What’s the difference between Balinese and Javanese gamelan? (spoiler alert: Balinese gamelan is more dynamic and rhythmically dense than tranquil Javanese gamelan.) Here are examples — Balinese and Javanese.

“Sada Do” is a song by Marsada Band, an internationally-known (and deservedly so!) Toba-Batak vocal group based in Sumatra, one of the largest islands of the more than 17,000 in Indonesia. (“Marsada” means “together” in Batak.)

Though Marsada Band’s music is modern their Toba-Batak indigenous group is ancient and has a rich language and culture. The Toba are most known for their distinctive three-story “Jabu” houses. Concerned about other things you may have heard about the Batak? This page, listing many beautiful elements of Batak culture, argues that you need not worry.

Yes, there is traditional Indonesian dance music, with origins many centuries in the making, but there is also a much more recent “traditional” form that our friend Gugum Gumbira and his artistic associates created as a form of protest.

Jaipongan is dance music from Indonesia with unpredictable rhythms and almost exclusively non-Western instruments that artists in Western Java–specifically Gugum Gumbira–created in 1961 when the Sukarno government banned rock ‘n’ roll. Take a look at this Jaipongan dancing at a celebration honoring Gugum.