You are here: Home › ALL AROUND THIS WORLD’S LIVECAST CLASSES

WELCOME TO ALL AROUND THIS WORLD

Join Jay Sand for dynamic live classes that introduce you and your children to the world through international songs, kid-friendly cultural dances and FUN.

COME TO CLASS LIVE WITH JAY from the comfort, and safety, of your home.

Jay Sand is the founder and lead teacher of All Around This World, a global music and world cultures program for young kids (infants - 9 year-olds) and their families. JOIN JAY FOR LIVECAST CLASSES -- sing, dance and explore the world with him each week.

All Around This World is a global music and world cultures project that introduces young children (usually infants to 9 year-olds) and their families to countries and cultures everywhere using singing, dancing and international musical fun. Jay has been teaching All Around This World parent-child classes and performing family-friendly concerts since 2009. In that time he has created a world music/global cultures curriculum that consists of over 250 multilingual songs and engaging cultural experiences that originate from over 100 countries, taught thousands of world music classes to kids and traveled the globe playing concerts for children. 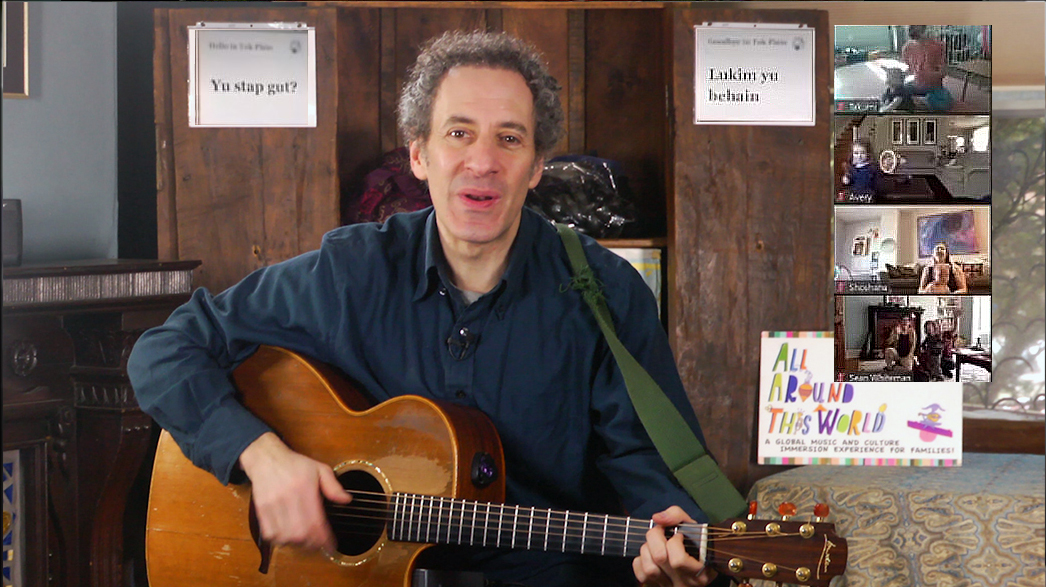 Upcoming ALL AROUND THIS WORLD LIVECAST CLASSES:

If you want to join class on Zoom, contact me and I'll send you login details.

If you’d like to come to class on a regular basis and get lots of information each week about the countries and cultures we’re exploring, REGISTER HERE.

To enroll in amazing online courses that take your family on a deeper multimedia musical tour of the world, enroll in All Around This World's courses at EXPLOREEVERYWHERE.COM.

Jay Sand, guitarist and children’s music teacher, dad of three girls (10-15 years old) and world traveler (much more so before he became the dad of three girls), developed the All Around This World curriculum with his children as a way to introduce them to the countries he’s already visited and the many more he plans to visit with them. Jay held his first All Around This World classes in 2009 in his West Philadelphia living room. Since then he has taught thousands of world music classes to children and has traveled the world  with his family playing multilingual, multiicultural concerts for kids.

About All Around This World