You are here: Home › The Caribbean

All Around This World’s classroom and homeschool lessons about the Caribbean for kids introduce your family to Caribbean cultures through interactive fun . . .

So much music. So much music. In this season’s All Around This World classes we travel, in virtual terms, to the Caribbean, where there is SO MUCH music. 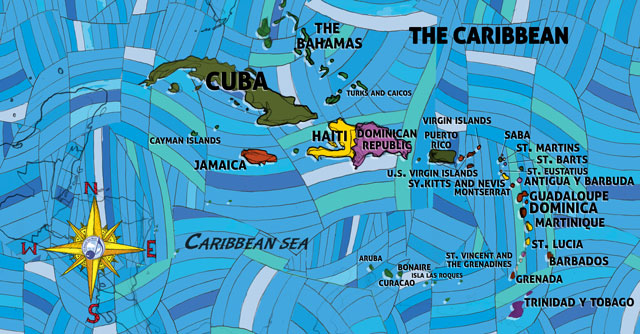 The many musics of the Caribbean tell the many tales of the region’s history, from the ancient island life of indigenous population to that population’s devastation at the hands of Spanish, British, French and other colonial powers, from the horrors of the African slave trade to its many lasting political and personal implications, from the devastating mismanagement–if not outright plundering–of some of the region’s post colonial leaders to the generally democratic, and globally interactive countries of the day. With a history so rocky and the many wounds that such a history caused still so undeniably raw, one can only marvel at the pride, passion and joy that’s at the heart of every kind of Caribbean music. We have way too much ground to cover to even start a superficial survey of Caribbean music, but that kind of practical reasoning should never stop us.

If you’re not in an All Around This World classroom but instead you’re following along at home, you can still enjoy our lessons about the Caribbean for kids:

— Haiti:  we elect the next Haitian president with the help of rara.

— Dominican Republic: we embrace the deceptive simplicity of merengue.

— Puerto Rico: we let the drums take the  lead as we dance he bomba.

— Jamaica: we live the history of Jamaican music from kumina through ska to dancehall ragga.

— Martinique: we dance closer and closer to our partners while we zouk.

— Barbados: we simultaneously honor and dishonor the British Navy with our “landship”

— Trinidad: we not only do the limbo, but we party like there’s no tomorrow–which there is, or at least we hope so, but still . . .–during Carnaval.