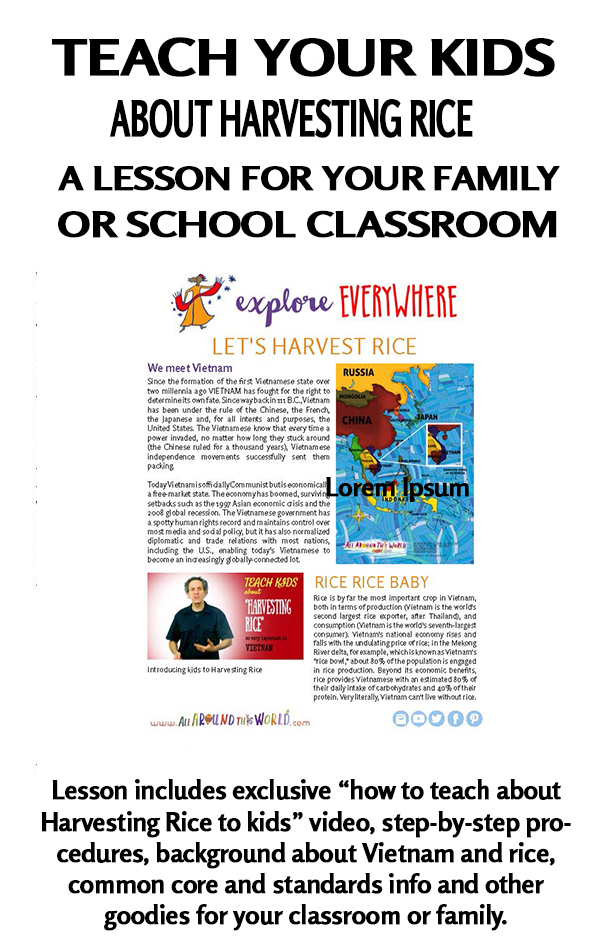 Rice is by far the most important crop in Vietnam, both in terms of production (Vietnam is the world’s second largest rice exporter, after Thailand), and consumption (Vietnam is the world’s seventh-largest consumer). Vietnam’s national economy rises and falls with the undulating price of rice; in the Mekong River delta, for example, which is known as Vietnam’s “rice bowl,” about 80% of the population is engaged in the production of this “white gold.” Beyond its economic benefits, rice provides Vietnamese with an estimated 80% of their daily intake of carbohydrates and 40% of their protein. Very literally, Vietnamese can’t live without rice.

What is this food we know as rice, and how do we get it out of the ground in Vietnam so it
can travel halfway around the world, ultimately ending up, via that Chinese take-out place on the corner, in a little white tub left to languish far too long on the bottom shelf of your fridge?

In the simplest terms, rice is the a seed of a plant which is known to people who care about such things as Oryza sativa or Oryza glaberrima. It’s the second most-produced grain on the planet after maize/corn and, as the staple food of roughly half of globe’s population, especially those who live in Asia, Africa and Latin America, rice provides nearly a quarter of the calories consumed by humans worldwide. Rice is so central to the Asian diet that the word “rice” is often a synonym for “food.”

Rice is not an easy crop to cultivate. First of all, though rice can grow almost anywhere, like on the side of a steep hill or mountain, it grows best in places where there’s abundant rainfall that can flood the rice fields while the young seedlings are setting, a process that reduces the growth of certain weeds and pests. Harvesting rice is labor intensive, and is generally done manually, most often by farmers who own small plots or by groups of seasonal laborers. Unmilled rice is known as “paddy” and is best harvested when the grains are moist. After harvesting comes threshing, which ideally takes place within a day or two after the harvest, and then the paddy has to go to a mill (or sit in the sun by the side of a road) where it must dry quickly to avoid becoming moldy. When the rice is dry hullers remove the outer husk–another process that is often still done by hand.The hulling process can yield two general kinds of rice:

— brown rice: the huller only removes the outermost husk, leaving most of the nutritional value intact
— white rice: further “polishing” removes the bran and the germ (and most of the vitamins)

To those who just know rice as “rice” one bowlful may appear pretty much the same as any other, but much of the world’s population knows all rice is not created equal. Worldwide there are more than 40,000 varieties of rice; the International Rice Research Institute’s “genebank” has collected about 100,000.

In class we’re going to harvest rice, listening, as we do, to Pham Duy’s version of the traditional rice harvesting song, “Ho Lo.”