All Around This World’s exploration of Africa includes sing-along, dance-along classroom and homeschool lessons about Uganda for kids . . . Meet the world through music –“come to class” with Jay. 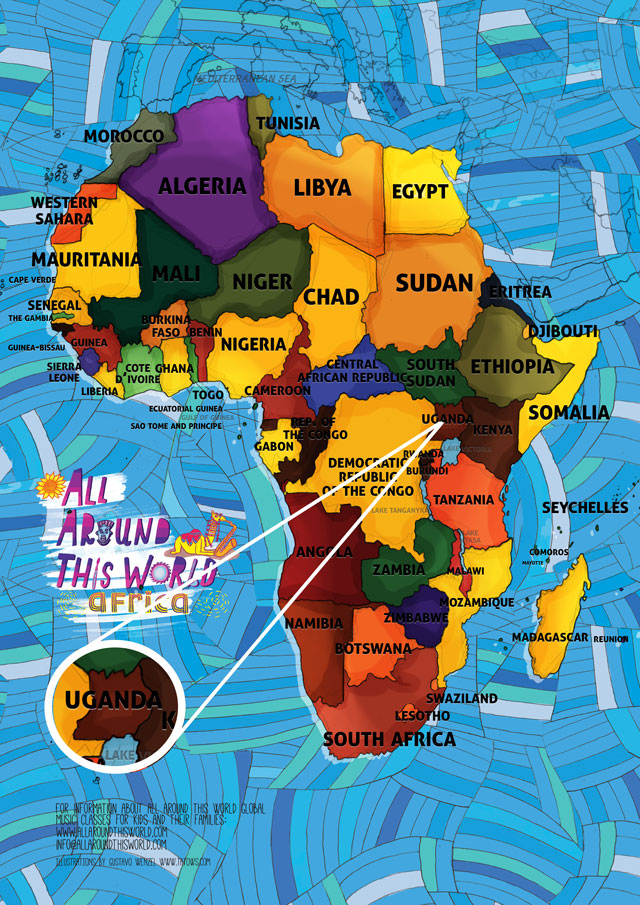 When British statesman Winston Churchill referred to the Uganda as “The Pearl of Africa” after spending some time there in the early 1900s (likely echoing the words of previous British visitor H.M. Stanley) he set the small East African apart from as a singularly precious jewel in the Empire’s African crown. Uganda deserves the distinction as a supremely beautiful land, rife with endless rolling hills and forests full of lush green trees bearing tropical fruit, and the prevailing culture of generosity, especially concerning the welcoming of guests, may have made Churchill feel as if the nation was born just for him. In truth Uganda is an extraordinarily ethnically diverse nation whose people had developed powerful political and economic systems over tens of thousands of years of being populated before the British claimed it as their own. And, in truth, Uganda’s distinction from other colonies in Africa did not result in its being able to avoid the narrative that has become all too common in the post-colonial era — autocratic dictators, military coups, constant battle with a rebel army and a President who has been ruling for decades and just won’t quit.

Fortunately for Uganda, despite a very present colonial legacy, despite Idi Amin and Joseph Kony and a very stubborn Museveni, the nation’s longer term strengths remain. And after decades of relative economic and political stability, Uganda’s densely fertile land and its diverse yet tightly-woven ethnic groups — not to mention its energetic and melodic music, some of which we hear on the AATW: Africa CD — provide ample hope for the Ugandan people. Visit Uganda today and you will find not the war-torn nation of Idi Amin — that was way back in the ’70s! — but an optimistic, albeit complex society that aspires to put the recent (colonial and post-colonial) past behind it and forge as boldly as possible forward, into the future.

Our pages and lessons about Uganda for kids are still in process. Ample content about Ugandan music, dance, food and daily life to come.