All Around This World’s exploration of Latin America includes sing-along, dance-along classroom and homeschool lessons about Argentina for kids . . . Meet the world through music –“come to class” with Jay. 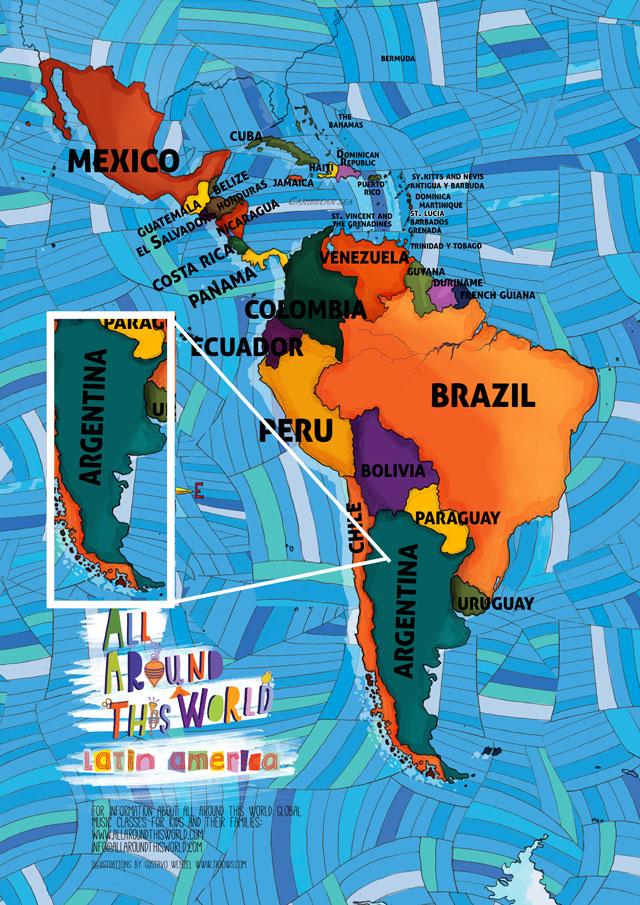 Argentina is a substantial, sprawling, naturally beautiful and deceptively culturally diverse country in southern South America that has emerged from decades of political and economic instability to be come one of Latin America’s most entrancing nations.

— OVERVIEW: “Long before the Spanish arrived in the early 16th century to colonize the land we now know as Argentina, a number of indigenous peoples lived there, such as the Diaguita in the Andes mountains and the Guarani, who lived further south and east . . .”

— MUSIC: “Argentina’s greatest musical pride is the tango, a passionate music and accompanying form of dance that arose along the border between Argentina and Uruguay in the late 19th century but really took root in the seedier bars in Buenos Aires and Montevideo . . .”

— LANGUAGE: “Argentina’s most widely-spoken language is Spanish, but ‘Spanish’ isn’t only just ‘Spanish . . .'”

— TANGO!: “Tango is a partner dance that developed in the 1900s in tows along the border between Argentina and Uruguay . . .”