All Around This World’s exploration of Latin America includes sing-along, dance-along classroom and homeschool lessons about Uruguay for kids . . . Meet the world through music –“come to class” with Jay. 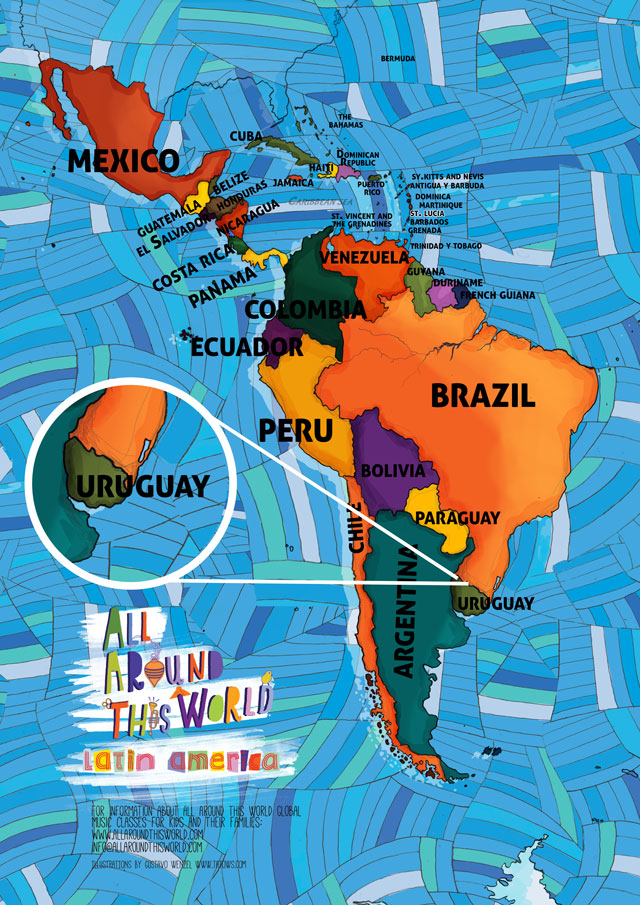 This week in music class we enjoy Uruguay, a country on South America’s Atlantic coast that may very well have it all . . .

— OVERVIEW: “Uruguay may not have a lot of big-name recognition in the U.S., but since emerging from years of military rule in the ’70s and early ’80s, it has become not just one of Latin America’s most politically and economically stable nations, but truly “a hidden gem . . .”

— MUSIC: “Uruguayan music finds its inspiration in the nation’s history — a Native American population mixing with Spanish conquistadors who brought African unwillingly along for the ride . . .”

— LANGUAGE: “While most Uruguayans speak Spanish, those who live near the border with Brazil have developed a hybrid of Spanish and Portuguese called “Reverense Portuñol” (also called Fronterizo) . . .”

— IMAGES: “Flickr.com’s “Uruguay” slideshow presents a overview of the nation’s invigorating natural landscape, its Spanish era architecture, and the occasional snap of Uruguayans going about their daily lives — dancing, playing chess, dressing up for Carnival . . .”