You are here: Home › East and Southeast Asia

All Around This World’s classroom and homeschool lessons about countries like Japan and China for kids introduce your family to East and Southeast Asian cultures through interactive fun . . .

With the exception of some stunning forms like Japanese taiko, Chinese “thunder” drumming, and Korean pungmul gut, driving drum beats are not at the heart of East and Southeast Asian traditional music…. 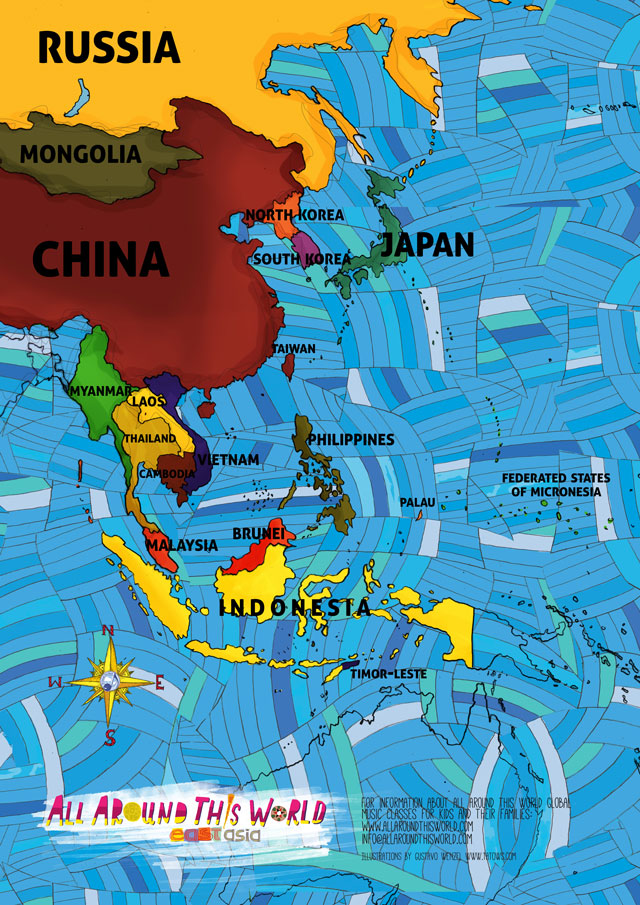 Instead, most ancient East and Southeast Asian music, such as Japanese gagaku, Thai piphat and Indonesian gamelan, developed over hundreds if not thousands of years, primarily in the courts of powerful dynastic emperors, and rely primarily on gongs, cymbals, shakers and other kinds of light, mesmerizing percussion to accent the xylophones, strings and wind instruments that provide their melodies.

In our All Around This World classes we explore East and Southeast Asia by taking a tour that starts in China and primarily works its way down the East Asian coast.

If you’re not in an All Around This World classroom but instead you’re following along at home, you can still enjoy our lessons about East and Southeastern nations like China for kids:

— China: we start the New Year off right by dancing like both lions and dragons

— Hong Kong and Taiwan: we take this opportunity to exeperience the ancient and duly respected cultural art-form–the kung fu movie. Ya!

— Japan: not only do we sing karaoke but we get to do an Okinawan bon odori dance.

— The Koreas: we give thanks to the full moon by dancing like turtles during the ganggangsullae.

— Thailand: we float our cares, our imaginary candles and our (equally imaginary) fingernail clippings down the river during Loy Krathong.

— Myanmar: we live a day in the life of a monk.

— Malaysia: we play sepak takraw, one of the world’s most acrobatic “keepie uppies”

— The Philippines: we take out our long poles and prance like birds as we dance tinikling

— Indonesia: we gong along to gamelan and chant together like a thousand Balinese monkeys.