All Around This World’s exploration of Africa includes sing-along, dance-along classroom and homeschool lessons about Ghana for kids . . . Meet the world through music –“come to class” with Jay. 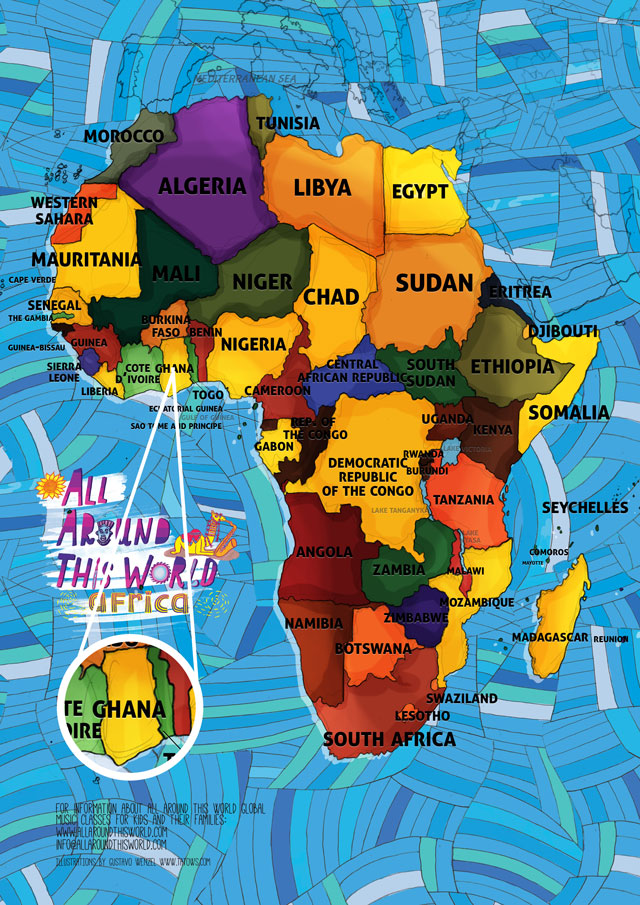 This week in music class All Around This World gives us all a crash course in Ghana for kids, which LonelyPlanet.com describes as “Africa for beginners.” This is not a slight, but a testament to the country’s political stability and cultural diversity, as well as to the genuine generosity of its people.

— OVERVIEW: Formerly known as the Gold Coast because of the deposits of gold once found in its soil, and “the fever coast” because so many early Western visitors had their first bout with malaria there, Ghana became independent from Britain in 1957 . . .

— MUSIC: Ghana is best known in the international music community as the historical home of highlife . . .

— LANGUAGE : Most Ghanaians are part of one of six ethnic groups and speak both English, the common colonial tongue, and the language of their group . . .

— KPANLOGO: The Kpanlogo is a recreational dance of the Ga people which they created in the late ’50s/early ’60s in part to celebrate Ghana’s indepdendence from the British . . .