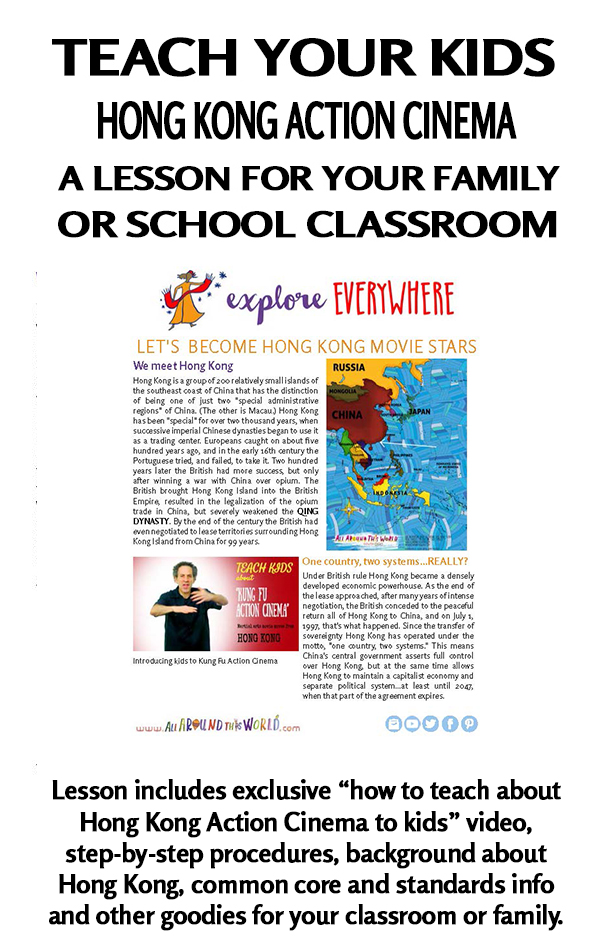 Hong Kong may be rightly proud of its accomplishments as an economic powerhouse and its history and culture may have many intriguing dodges and folds, but worldwide, Hong Kong is perhaps best known as the home of the kick-em-up kung fu movie.

Hong Kong’s film industry started to produce martial arts movies as early as the 1938s, when the Cantonese language film The Adorned Pavillion included the narrative fiction genre called wuxia,
which emphasizes chivalrous and philosophical engagement in the martial arts. By the 1970s a Mandarin-based, grittier and more visually dramatic form of “kung fu” replaced it, and with it came astounding global popularity. In 1973 young martial arts movie star Bruce Lee electrified audiences with Enter the Dragon, which was the first ever English language, US-Hong Kong production. (Lee died soon thereafter, unexpectedly and mysteriously.)

Multiply talented Jackie Chan (“actor, action choreographer, filmmaker, comedian, director, producer, martial artist, screenwriter, entrepreneur, singer and stunt performer,” says the entry about Chan on Wikipedia) became the next huge Hong Kong action film star, blending martial arts and comedic timing in films like the 1985 Police Story that delighted both Eastern and Western fans of the genre. Chan’s Hong Kong movies were usually joyful and engaging, toying with the camp that had defined the genre, such as the overused device of the star of the film fending off numerous attackers who come at him one by one. In 2000 Hong Kong (well, actually Taiwan) cinema soared back toward wuxia with Ang Lee’s elegant Crouchin Tiger Hidden Dragon, which won the Academy Award for Best Foreign Language film and became the highest grossing foreign language movie in American cinematic history. ([this link has kung fu fighting and should be just for grown-ups]: Is this scene from Crouching Tiger Hidden Dragon the best fight scene ever?)

In class we’re going to fight off a hundred attackers with acrobatic kung fu and a smile.

Also, OF COURSE we know that there is much more to the culture of Hong kong than action cinema. All Around This World offers many types of musical experiences and cultural celebrations. This lesson is a touch more frivolous than an ancient cultural dance, but it does give us a chance to, literally, leap into learning about Hong Kong.