You are here: Home › West Asia and the Middle East

All Around This World’s West Asian and Middle Eastern songs for kids introduce your family to so many cultures through interactive fun . . .

All Around This World’s West Asia and the Middle East’s seasons includes songs about love, hope, water and cows. There is awesome Arabic drumming raucous Andalou rock, cook Kurdish crooning and a lovely song about our good friend, the moon. 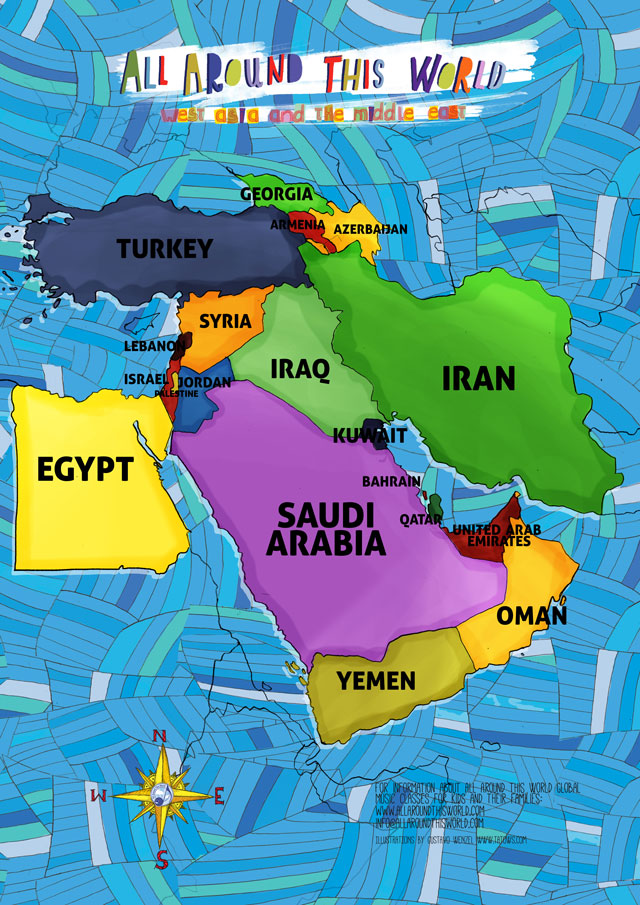 Meet All Around This World’s West Asian and Middle Eastern songs for kids:

We are planning to record way more music for the All Around This World West Asia and the Middle East CD project than can fit onto one CD, so we’re looking excitedly ahead at putting the music onto two of that. That raises the question of how we should divide the region’s music in a way that’s accurate, respectful, relevant and politically reasonable. As with everything in this region, this is very tricky. We decided to call this season’s worth of material “West Asia and the Middle East” to acknowledge some of this ambiguity; some refer to the region one way, others another, some care a lot what the area is called, some only care at all depending on who is doing the calling.

For these two volumes, we are considering dividing our West Asian and Middle Eastern songs for kids along the lines of songs that originated from the Arabic-dominated nations of the region, occasionally referred to as the Mashriq (as opposed to North Africa’s set of African countries, the Maghreb. That would clearly encompass nations like Lebanon, Syria, Saudi Arabia and Iraq. While not always included in the Mashriq, Egypt isn’t always part of the Maghreb either, and, when categorized, does often fall into the list of Marshriq nations. That distinction gives us the clarity to put all the other music from the region on another volume, “Beyond the Mashriq,” like our songs from Turkey, the Caucasus and Iran. Simple, right? Except . . . what do we do about Israel? Certainly the land that Israel inhabits is part of the geographic land considered Mashriq. But culturally, historically, politically, Israel is not widely considered part of the team. So right now we have volume 1 featuring songs from the Mashriq, and volume 2 consisting of songs from elsewhere in the region. If you know more about these things than we do, which you certainly might, or want to discuss this choice or anything else relating the dicey political decisions All Around This World will forever find ourselves having to make, drop Jay a line.

PRODUCER: Joe Tayoun. An experienced and accomplished Lebanese-American hand percussionist who has performed West Asian and Middle Eastern music for two decades with myriad ensembles, like the Middle Eastern/Indian band Jaffna, and, currently, with international Turkish-American band, Barakka. Joe and musicians from Barakka also will appear on All Around This World: Africa performing music from Egypt and Algeria.  See Joe and Branavan Ganesan from Jaffna perform a dumbek duet. Meet Joe via the Philadelphia Folklore Project.