You are here: Home › Africa › A Hiyeni 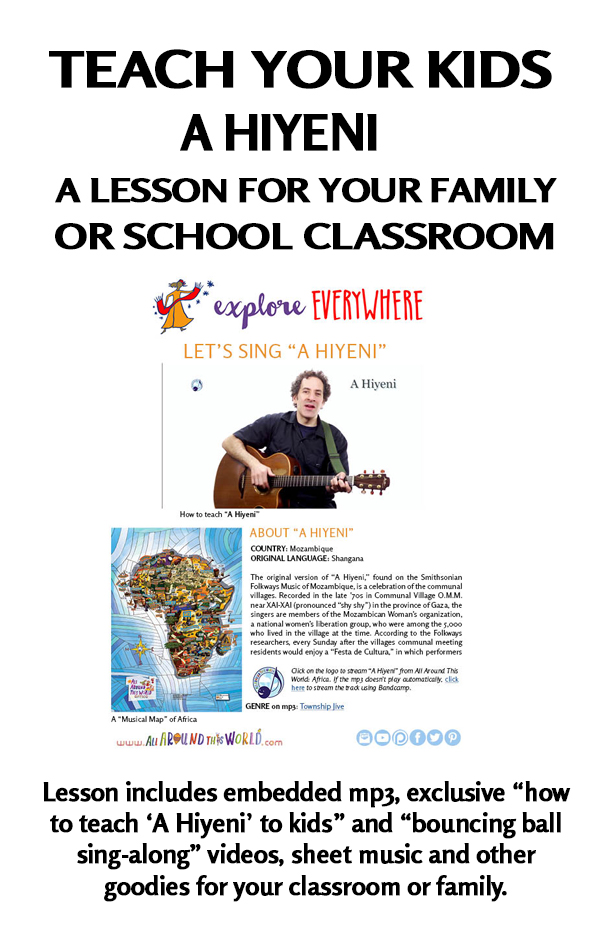 We sing “A Hiyeni,” a hopeful, collective-organizing, “let’s-work-together,” Mozambican independence-era “African greeting song” to gather a crowd when we start a class or concert.

In 1975, Mozambique became independent after five centuries of Portuguese rule. During the war for independence, which lasted for 14 years, the FRELIMO (Front for the Liberation of Mozambique) established communal villages in the areas they had wrested from Portuguese control. In these villages Mozambicans were able to revive their traditional culture which the Portuguese had either demeaned as “uncivilized” or banned.

The original version of “A Hiyeni,” found on the Smithsonian Folkways Music of Mozambique, is a celebration of the communal villages. Recorded in the late ’70s in Communal Village O.M.M. near XAI-XAI (pronounced “shy shy”) in the province of Gaza, the singers are members of the Mozambican Woman’s organization, a national women’s liberation group, who were among the 5,000 who lived in the village at the time. (Certainly an “African women’s song!”) According to the Folkways researchers, every Sunday after the villages communal meeting residents would enjoy a “Festa de Cultura,” in which performers from each of the village’s four areas would lead their followers in singing and dancing until dark.

In music class our version of “A Hiyeni” strips away the communist context but still urges us all, through this African greeting song, come together to build our “village.”

LYRICS OF THE ALL AROUND THIS WORLD VERSION: