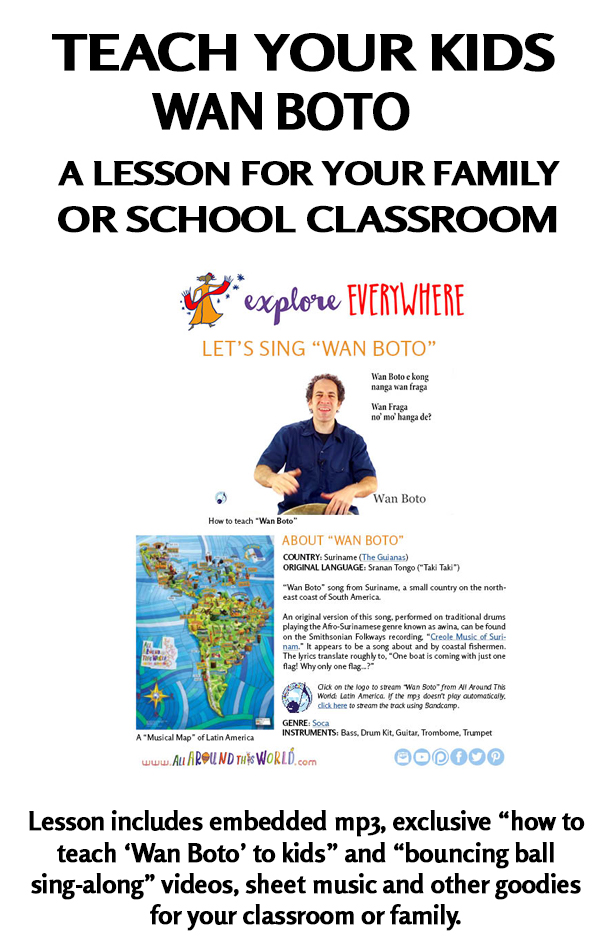 A Caribbean drumming song, originally from Suriname, which is a small country on the Caribbean coast of South America. Unlike any other country in South America Suriname was primarily a colony of the Netherlands, so the culture and colonial language are not Spanish or Portuguese, but Dutch. Suriname has a very diverse population composed of substantial percentages of East Indians (primarily Hindu descendants of Northern Indian laborers who replaced Africans after the abolition of slavery), “Creoles” (people of European descent born in Suriname), Indonesians and “Maroons” (descendants of escaped slaves). There is also an active minority of indigenous people such as Carib, Arawak and Amerindians who retain their original languages and religions. The official language of Suriname is still Dutch, but many in the country speak Sranan (sometimes called Sranan Tongo, or “Taki Taki,”) which is a creole language that draws upon Dutch, English, Portuguese and a few African languages.

An original version of our call-and-response Caribbean drumming song, performed on traditional drums playing the Afro-Surinamese genre known as awina, can be found on the Smithsonian Folkways recording, “Creole Music of Surinam.” It appears to be a song about and by coastal fishermen. The lyrics translate roughly to, “One boat is coming with just one flag! Why only one flag…?”

Engineering and co-production of drums, keyboard and bass: Mark Wolfe at AudioMind.