You are here: Home › South and Central Asia › Qambarxan 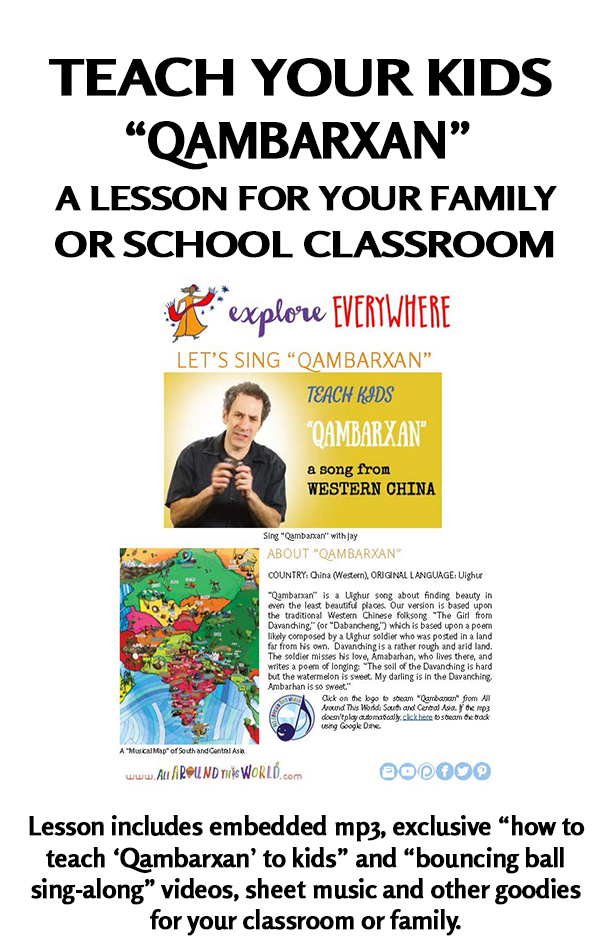 “Qambarxan” is a Uighur song about finding beauty in even the least beautiful places. Our version is based upon the traditional Western Chinese folksong “The Girl from Davanching,” which is based upon a poem likely composed by a Uighur soldier who was posted in a land far from his own. Davanching is a rather rough and arid lan. The soldier misses his love, Amabarhan, who lives there, and writes a poem of longing: “The soil of the Davanching is hard but the watermelon is sweet. My darling is in the Davanching. Ambarhan is so sweet.”

About “The Girl from Dabencheng:”

“The Girl from Dabancheng (Uighur: Qamberxan) is a well known folk song with Chinese lyric translated by Wang Luobin, and adapted from the Uyghur folksong Qamberxan. One of the early recordings of the song Qamberxan was done by a German ethnomusicologist on the singing of a Turpan Taranchi farmer’s 16-year-old daughter. The song was most likely composed by an Uyghur soldier back in the time of Yaqub Beg, when the soldier was posted from southern Xinjiang to the north (Ili) or east (Turpan). Indeed there are many songs dated back that time associated with a soldier’s courtship, such as Havagul (mispronounced and adapted by Wang Luobin as Avargul), which talks about a girl in Ili. However, Qamberxan talks about a girl in Dabancheng (or Davanching in the Uyghur language) which lies between Turpan and Urumqi, and is a district of Urumqi. This district is well known as an entrepot on inter-oasis travel. The reputation of the beauty of local girls is partly due to the mixing among the different populations that traveled through it.” — Wikipedia

Lyrics of the All Around This World version:

The soil of the Davanching is hard
But the water melon is sweet
My darling is in Davanching
Ambarhan is so sweet.

Ambarhan’s hair is so long
It touches the ground
Please ask darling Ambarhan
Does she want to get a husband.

My tiny pearls spilled on the ground
Please help me to pick them up
I’d like to kiss you, but can’t reach
Please bow your head down.

One can ride a horse
Around icy mountains.
One tortures a good soul
By an evil man

It is hard to see
No matter how hard I look.
The separation with Ambarhan.
Is extremely hard to endure