All Around This World’s exploration of Africa includes sing-along, dance-along classroom and homeschool lessons about Algeria for kids . . . Meet the world through music –“come to class” with Jay. 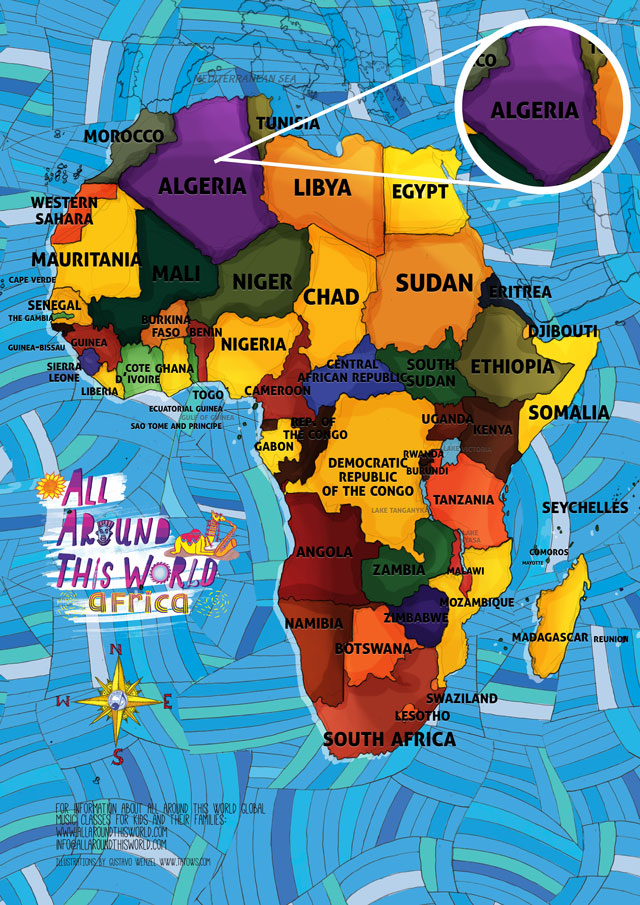 This week in music class All Around This World ventures to North Africa seeking explorations in Algeria for kids, embracing this historic home of Berbers and Barbary pirates, a land of vast Saharan deserts and lush, green oases, a country that has been ruled by the Carthaginians, Romans, Ottomans and French, yet experienced its most difficult civil war [note: some content in this link is just for grown-ups] only after becoming independent. Algeria is the birthplace of Camus and Derrida, who left to philosophize in Europe, and Frantz Fanon, who came there to practice psychiatry and ultimately to make revolution. About 99% of the Algerian population is Sunni Muslim and the country has the reputation of being less-than-supportive of gender equality, though 70 % of Algeria’s lawyers, 60% of university students are women. In our music class we build connections to Algeria for kids by listening to rousing Rai, singing about a long walk in the desert, and jiggling our bellies.

— IMAGES: Flickr’s Algerian photo spread provides one image after another of its breathtaking natural landscape, interspersed with images of what must be its other national treasure — the Algerian national soccer team . . .

— WHEN YOU GO THERE: The ’90s were a politically violent time in Algeria and destructive civil war is usually not a great atmosphere for happly-go-lucky backpacking.