You are here: Home › Africa › Lesson 9: Congo and Congo

All Around This World’s exploration of Africa includes sing-along, dance-along classroom and homeschool lessons about the countries of the Congo for kids . . . Meet the world through music –“come to class” with Jay. 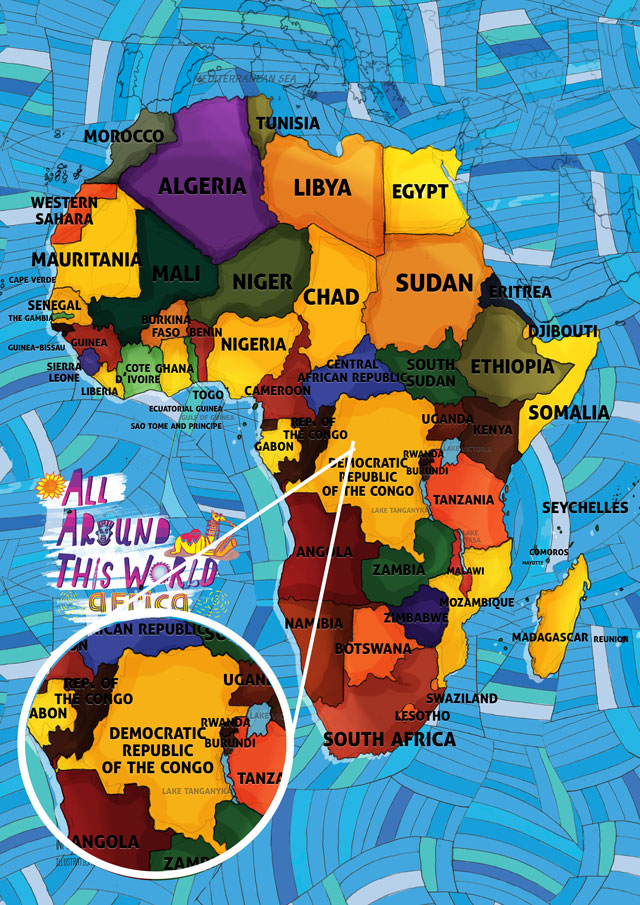 This week in music class we tell the tale of two countries in the Congo for kids — the Democratic Republic of Congo, sometimes known as Congo-Kinshasa, and the Republic of Congo, a.k.a. Congo-Brazzaville. Neither has had an easy recent history, but they’re substantially different countries that have experienced very different ups and downs. One thing they do have in common is soukous — contagious, pulsing dance music that starts with Cuban dancehall rumba and adds a heaping cascade of African guitars. They also share the kwassa kwassa, a hip-shaking dance that, if done improperly, could turn your knees to jelly.

— MUSIC: One of the Congo’s most famous and most fabulous forms of music is soukous, which is infinitely danceable . . .

— LANGUAGE: While there are several hundred languages in the DRC and ROC, French is an official language of both, as is Lingala.

— WHEN YOU GO THERE: Independent travel may not be easy, safe or even generally advisable on either side of the Congo River, but if you do survive you’ll probably have a lot of fun . . .

— KWASSA KWASSA: In the Congo, when so inspired, people literally “get down,” shaking like crazy with the Congolese hip roll.