You are here: Home › Africa › Morocco

All Around This World’s exploration of Africa includes sing-along, dance-along classroom and homeschool lessons about Morocco for kids . . . Meet the world through music –“come to class” with Jay. 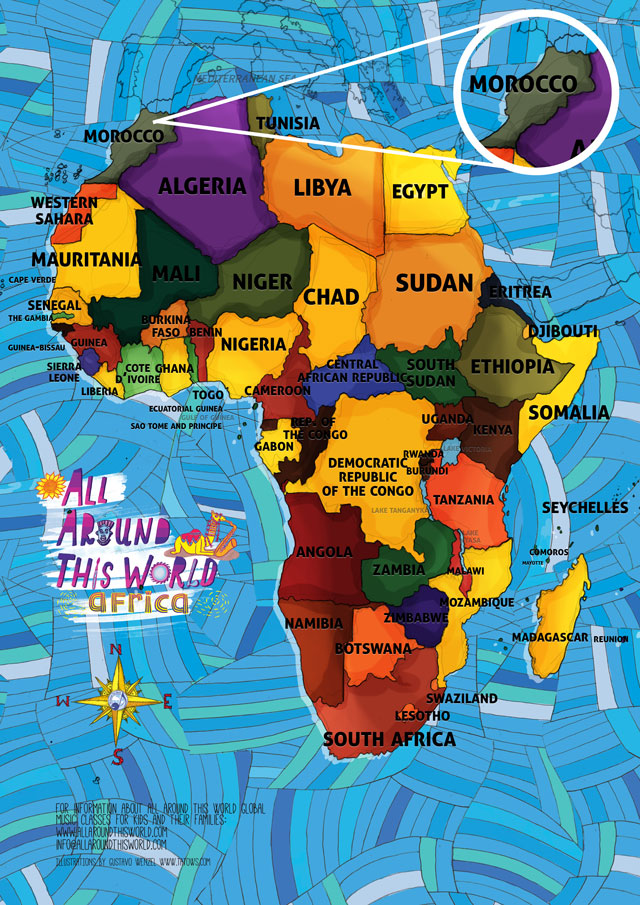 Though some scholars of music insist there’s a fundamental relationship between Islam and the formation of Western musical theory, as we enjoy Moroccan songs in class we’ll have a hard time denying their close melodic, rhythmic and emotional relationship with the music of the Indian subcontinent. Moroccan music, and much of its incredibly rich culture, is a blend of North African Berber traditions and influences imported over more than a millennium, primarily (though not exclusively) from nations located much further to the East.

Morocco first consolidated as a nation independent of the Arab Empire over twelve hundred years ago. For the last several hundred years European powers like the Spanish, Portuguese and the French fought with each other, and with proud Moroccans, to control the nation. The French eventually took charge in 1912, but their rule didn’t last long; they ceded formal control soon after the King’s return in 1955. Today, despite its being the world’s longest running monarchy, Mohammed IV, Morocco elects its own political leaders. Still, while 99% of Moroccans are of Arab-Berber descent and almost all Arab-Berbers are Muslim, increasingly strong internal divisions between Islamic fundamentalists and Islamic secularists threaten Morocco’s political stability.

With this lesson about Morocco for kids learn about Moroccan Berber culture by “getting married” at Morocco’s Imilchil Marriage Festival.