You are here: Home › Fiji

Earlier this week we met Fiji’s welcome song, “Bula Maleya.” (Land in the Nadi International Airport on the western end of Viti Levu and it may well be the first music you hear.) Let’s end our week of music from Fiji with this tremendous version of the song. “Bula Maleya,” meet…ELVIS!

A Fijian meke — pronounced meh-kay — is the term for a traditional, communal form of spiritual folk song or dance. Fijian men, women and children use mekes to convey stories or daily life or long, epic tales of victory by the gods. In the Fijian meke dance every body motion, every hand motion, the position of every performer…even position of every member of the audience is important. There are special positions in a meke for members of the village hierarchy; placing them anywhere otherwise would be an insult.

The term “Melanesian music,” used in the broadest sense, covers a wide range of traditional styles ranging from the multiple genres of tribal songs found in Papua New Guinean singsings to Australia’s Aboriginal didgeridoo drones, from Solomon Islanders’ polyphonic pan pipes to Fijian lali drumming. Melanesians have long used a variety of slit-log gongs, flutes and bamboo pipes in their music but only recently, with the arrival of the Europeans, have they added stringed instruments like guitars and ukeleles into the mix. For example, Fijian music blends Melanesian and Polynesian forms and embraces multi-part harmony. Fijian string bands, like the Shefa boys seen rehearsing in this video, are groups of three or more performers playing guitar/ukelele/mandolin and singing in sweet multi-part harmony.

“Bula Maleya” may well be Fiji’s favorite song. It originated with Fijian soldiers who fought, as members of the British Commonwealth, in the British military campaign to fight the Japanese in Malaysia (then Maleya) during World War II. During the battles Fijian and Malayan soldiers became friendly and wrote this song to mark their cooperation. Today’s Fijians have adopted “Bula Maleya” as a welcome song, singing it readily to greet tourists arriving on the islands. 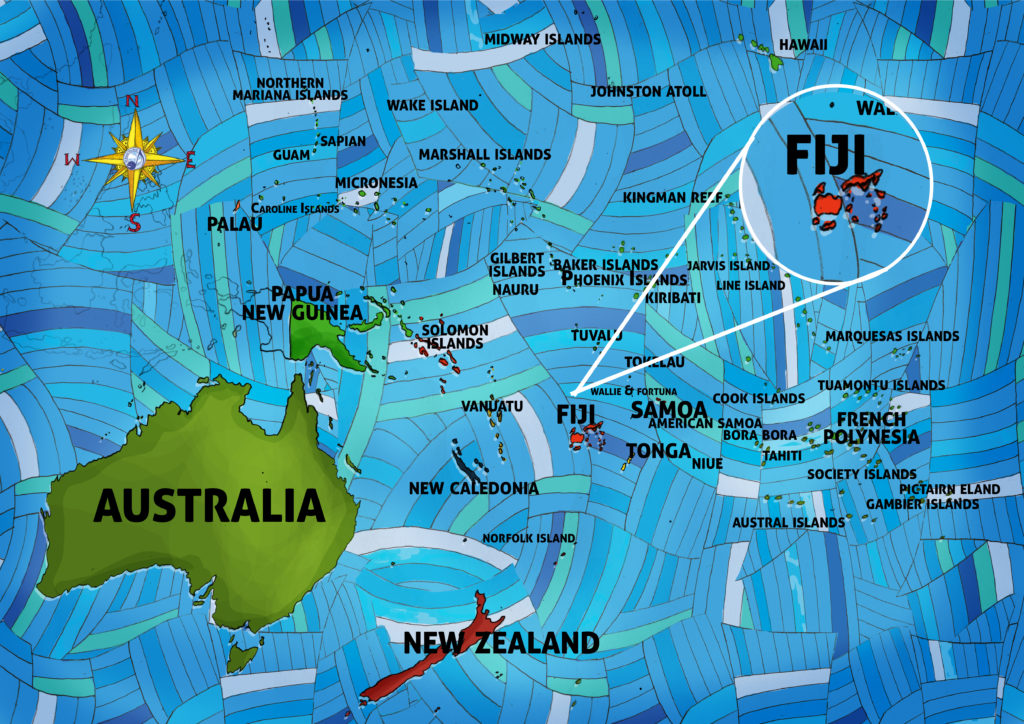 This week in our online class for kids we visit the Melanesian nation of Fiji.. There is disagreement among historians and archaeologists as to exactly when humans came to Fiji, though the general consensus is that people had arrived in the islands by about 1,500 B.C. There is agreement that two distinct groups settled Fiji; Melanesians, dark-skinned settlers who arrived in Fiji by way of Vanuatu, New Caledonia and the Solomon Islands, and lighter-skinned Lapita people, skilled navigators and fishers from New Caledonia who had originated in Southeast Asia’s Malay Peninsula. Later, the Lapita people left Fiji for islands further east, seeding the Polynesian islands like Tonga and Samoa. This left Fiji primarily to the Melanesians.

Whoever settled the place and when, today most Fijians live on the two main islands, Vanua Levu and Viti Levu; because Viti Levu’s interior is rugged most Fijians who call the island home live in the surprisingly urban Suva.

We really enjoy singing this song from Fiji, not in small part because we love singing the word “Chuluchululu.” Here we get to sing it with our Fijian family, most notably our favorite uncle. Doesn’t Uncle Johnny rock?

As we learned yesterday, dancers in the Pacific Islands tell extensive, epic stories with their hands. In the Melanesian island nation of Fiji, dancers choreograph hand motions along to narrative songs called mekes. This week we “try our hand” at a sitting-down meke, telling a tall tale about sailing the Pacific seas.

In the Melanesian island nation of Fiji, and elsewhere around the Pacific, dancers don’t even have to stand up to be fantastic. This video shows us a “sitting down dance” in which Fijian dancers use their arms and hands to tell a story.