You are here: Home › Korea

“Arirang” is, in essence, because of its ubiquity on the Korean peninsula, “the Korean national anthem.” There are literally thousands of different versions of the song and everyone–everyone!–sings it, both on festive and somber occasions. “Arirang, arirang, arariyo, Arirang, crossing over the hill, My dear who has abandoned and left me, Has not even traveled ten miles before having feet pains” The song is of mysterious origin, age and literal meaning. Is the song two hundred years old? Two thousand? Whatever the song’s story, Koreans protesting the 1910-1945 Japanese occupations claimed it as a resistance anthem, and since then the song has become synonymous with the pride of Koreans in surviving despite struggles. And who can Koreans be more proud of than their K-Pop superheros, BTS? Watch their sleek performance of Arirang in this video.

After the dictatorship of Park Chung-hee ended in 1979, Korean musicians embraced all kinds of traditional and modern music, socially important or otherwise, taking pride in their folk instruments and ancient genres while infusing them with a modern energy and musical sensibility. This openness enabled Korean musicians to actively embrace all sorts of international music, especially Western pop. Since the ’90s Korean popular music (K-Pop) has become a pan-Asian phenomenon, joining Korean fashion, movies, television and other media in what Koreans proudly call a “Hallyu” — a massive wave of Asian infatuation with Korean culture. In this video we enjoy the classic K-pop dance hit, Sao Taji and the Boys’ “I Know.”

Chuseok is the Korean holiday of thanksgiving. The festival takes place around the 15th day of the 8th month of the Korean lunar calendar, which is some time around the start of autumn. While modern Koreans first and foremost view Chuseok as a moment to focus on their families, traditionally Koreans have also played folk games throughout Chuseok, like tug-of-war or ssireum wrestling. Korean women along the southwest coast also perform the ancient Ganggangsullae dance forming a circle under a full moon and dancing for hours, long into the night, replying a liberating “Ganggangsullae!” as the song leader sings about both the struggles and joys of life. In class we enjoy this Korean womens’ dance by pretending to be turtles and mice.

“Achim Baram” (“Cold Morning Wind”) is a Korean children’s song whose lyrics are less important than what kids do with them. The hand motions that accompany this Korean kids’ song are essentially rock/paper/scissors — when we reach “Goori goori goori goori gawee bawee bo!” (“scissors, a rock, a hand”) we show one of the three. Kids really play this Korean rock paper scissors game, and apparently become quite competitive. Do we?

After the Korean War, tens of thousands of U.S. and Allied troops remained on South Korean soil. Western soldiers shared the styles that were popular at home with South Korean musicians, teaching them big band jazz, Western rock and eventually international pop music. South Korean musicians fused Western and even Japanese styles with their own, creating new musical blends such as “teuroteu,” or “trot,” which finds its origin in Japanese enka, with a touch of Western foxtrot thrown in for good measure. South Korean Trot music disappeared as an active genre for decades but has undergone a revival.

— sanjo: a completely instrumental music, performed with shifting rhythms and melodies on instruments such as the gayageum.
— pansori: a theatrical form of music performed by one singer and one drummer. The singer tells one of five different stories but individualizes the telling with jokes and social commentar,y, and
— nongak (“farmers’ dance”): a public form of percussion performed by twenty to thirty performers, most often in a rural setting.

Inspired by this video, grab a gong and join the farmers in their Nongak. 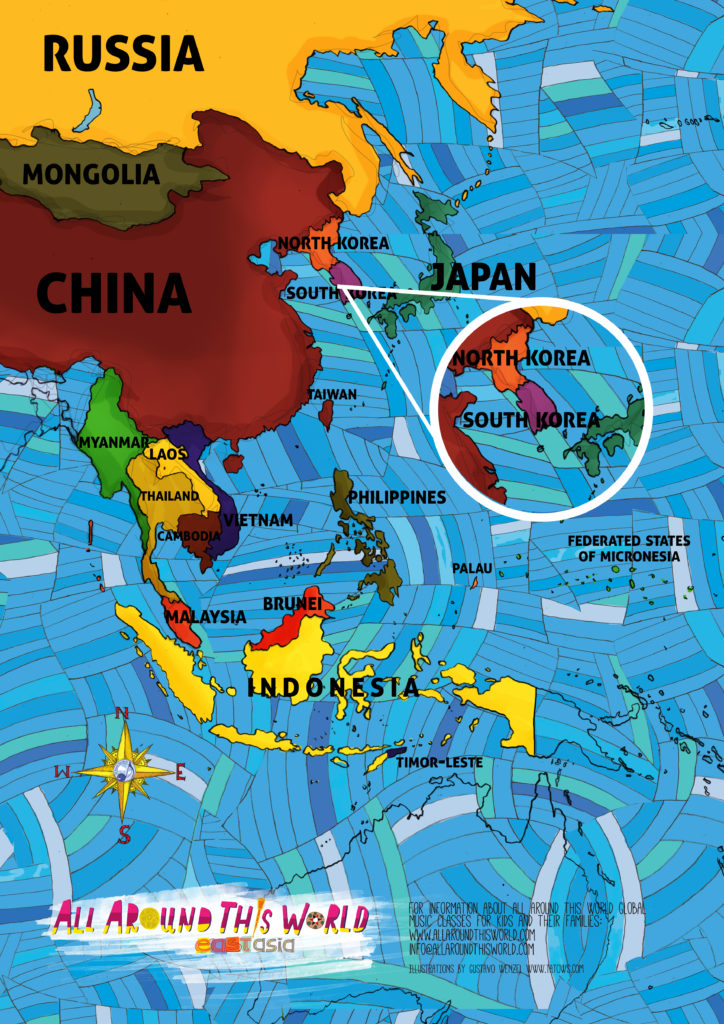 This week in our online class we strive to understand two complicated Koreas. North Korea is the world’s most militantly isolated nation. From the inflated cult of personality surrounding its self-procluamed “Supreme Leader” to its government’s policy of imprisoning anyone, even foreign journalists, who dare question the omnipotence of its regime, North Korea is about asÂ off-putting as any country could be. On the other hand, South Korea is one of the most wired, open and accessible nations in the world. In the years since splitting with the north it has raced to embrace all things that could connect it toÂ global society, like cell phones, the internet, and shamelessly over-produced pop music. The sad fact is that for more than three thousand years, and until just about sixty years ago, these two divergent nations were one. Then came a brutal Japanese colonization culminating in a World War and a wholly unwelcome starring role in the military and ideological struggle between the Soviets, the Chinese and the United States. Since a vicious armed conflict in the early ’50s — Americans know it as The Korean War while Koreans refer to as their civil war — North has split from South with such vigor that there is literally a line between the countries that no one from either is allowed to cross. The chasm between the countries continues to widen; the civil war’s wounds are still raw.

In our upcoming season of songs from East and Southeast Asia we may lean toward friendly folk songs of the occasionally-distant past but that doesn’t mean we have to disown the music of today. Okay, so BTS may not be our thing…but why not? Can’t just relax and appreciate the catchy melodies, the frenetic choreography…the many shades of hair? East Asian boy bands are all about spectacle. Watch this, or most any video of BTS, as an example. I know you’ won’t be able to look away.

In class this season, as we always do, we’re going to pay particular attention to the power of music to inspire positive change. From the 1970’s through the early 199o’s Korean songwriter and playwright Kim Min-Ki wrote songs that inspired a generation of Korean activists to resist the dictatorship of Park Chung-hee and other Korean autocrats. The government censored and eventually banned Kim’s songs so he began to release them with the aid of vocalist Yang Hee-eum who sang many of his compositions and claimed authorship. Today all South Korea knows Kim’s art and is free to find power in his poetry.

Yesterday we learned about “Arirang,” the most popular Korean folk song of all time. According to Wikipedia there are there are about 3,600 variations of 60 different versions of the song. All Around This World has done it! There are now 3601.